This election season has had many twists and turns making it hard to predict the primary frontrunners. The anointed Democratic nominee, Hillary Clinton, has been surprisingly steamrolled by socialist, Bernie Sanders and despite her opponents on both sides has not been shown capable to pull it through. These results are in sharp contrast to her campaign slogan “Ready for Hillary.” Much time has passed since she battled Obama during the primaries of 2008 and still Hillary hasn’t proved the electorate “ready” for what she has to offer. In fact much of the social media world is struggling to understand “#WhichHillary” will we see today. Her rallying cries against Bernie Sanders being a one issue candidate have fallen on deaf ears, as we all struggle to understand what issue Hillary actually stands for herself. She often says what is politically expedient and what she thinks people would want to hear. This is in part because she is part of the establishment. Problem is she’s been around for a long time and currently has conflicting reasoning and opinions when compared to her time as first lady.

Still despite her claims of having the experience it takes to run the country, we find it very hard to believe and trust Hillary. Why? Perhaps it’s her contentious vote on the Iraq War or her policy flip flops on marriage equality and universal health coverage. It just seems like her policy choices are blowing in the wind with the changing times. Perhaps this is the primary reason Democrats can’t seem to unite behind her and Republicans despise her. Her relentless almost selfish drive for the White House can seem off-putting as she panders to the masses and pockets huge sums of money for her talks. She just seems like she’ll say anything to get the vote and the campaign contribution. Regardless, it just seems like there is not one Hillary to get behind and perhaps that’s why she can’t seem to pull it through. With the upcoming debates and primaries, we’re all scratching our heads and asking ourselves #whichHillary are we going to see this time. 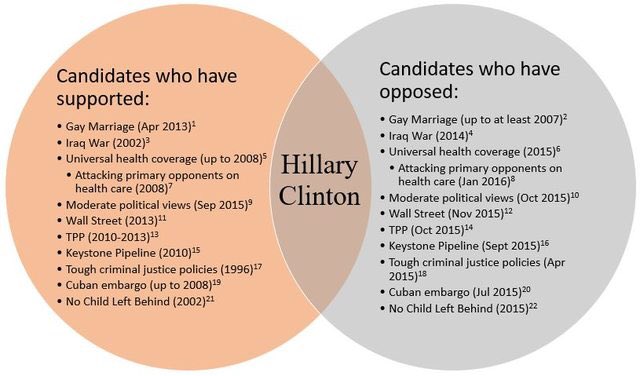 This post doesn’t reflect any of Fort Lauderdale locksmiths political views, and is just for entertainment value.